I know, I know....I've really been MIA this time! I'm not sure what happened, I've just been running and running and not been cooking much at home and running and running. Only one night of dinner made at home this week, now that might be some kind of record. Anywho...I'm going to try to update you on some of the activities I've been running and running to and from so you can see how much fun I've been having while putting you on the back burner. Because I feel like the neglect is less offensive if I get you to want to try some of the things we've been up to....right? Now that we've got that settled...
This was actually in April, but that's neither here nor there. What kind of a word is 'nor' anyway? Can't we just say 'or'? Why do we have to fancify it? Seems like 'nor' is trying to be all uppity or something. And I'm far from uppity. If the Duck Dynasty guys knew me, they would not call me a yuppy. Or maybe they would. Holy tangent! Let's circle back...a bunch of ladies got together to do a painting at The Social Canvas in Waukee and it was so. much. fun! I'm really not superbly artistic....I would maybe classify myself as crafty, but artistic is not in the same realm as me. But in these classes they stand up and take you through the paintings step by step so you really can't mess it up...that's my kind of art class! Plus you get wine, and you can't beat wine and painting.
Here's my finished masterpiece. I even had a friend on Facebook offer me money for it...how cool is that?! But it was such a fun experience that I want to keep the memory of it and shall hang it at the lake house to smile at all Summer...so no sale. Although it would've been fun to say I've sold a painting before. That does sound yuppy, doesn't it? 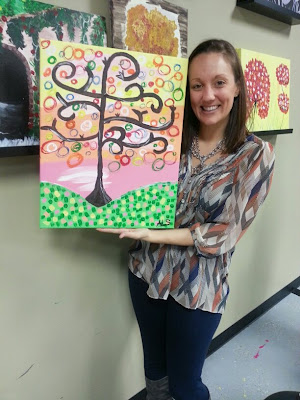 The whole group with our finished products...some are a lot better than others. I'm glad this picture isn't taken any more up close to see all the ones that beat mine out of the running of halfway good. 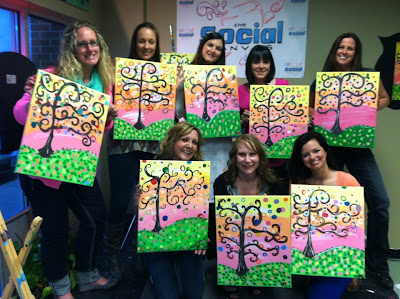 What's ladies night without a margarita the size of your head afterwards? The waiter asked me how big I wanted it, and I said "as big as you've got". I learned my lesson...it took three of us to finish it! 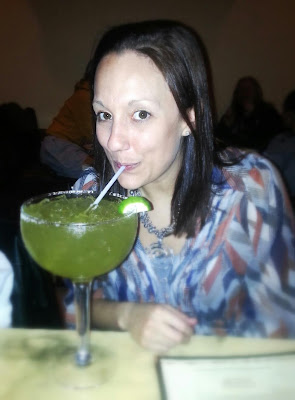 While on the Mexican theme, I will actually share a recipe with you today too! I mean, this is a food blog, I guess I can throw you a bone. This is super duper simple, and very nummy yummy to boot. It was a throw-together-make-ahead if that makes any sense? I was meal planning on Sunday and got all lazy about it. Found all these ingredients and threw them together to bake in happiness and merriment. But first to sit in the fridge for a day until we were ready for said happiness and merriment. Because everyone knows happiness and merriment is best on nights when you have dinner to throw in the oven when you get home. Ok, let's go....

Mix all ingredients except 1 cup of cheese together. You could even add some halved cherry tomatoes, or use enchilada sauce instead of taco sauce. Your boat floats one way, mine floats another. I guess that's what makes the world go 'round. I actually would've added maters if I had some on hand. My world doesn't go 'round much if I don't hit the grocery store. 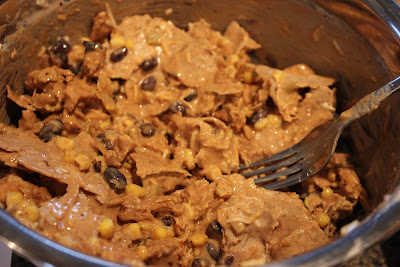 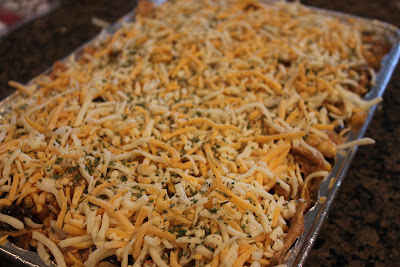 Throw in the fridge until ready to bake and throw it in the oven for 30 minutes at 425 degrees. It just needs to be warmed throughout and get the cheese all melty, since everything is pretty much cooked. Remember, we're just baking the happiness and merriment together. Top with greek yogurt, taco sauce, guacamole, and whatever else your little heart desires. Then eat.

It was good to dip chips with, it was great on its own. One of those versatile weeknight meals that leaves you saying "mmmmm" in front of the tv after it's been demolished. Yeah, one of those. 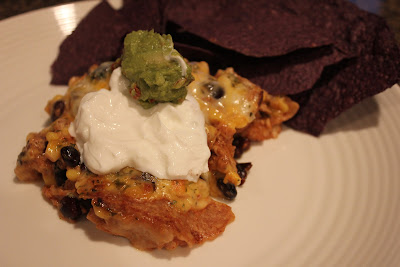 Email ThisBlogThis!Share to TwitterShare to FacebookShare to Pinterest
Labels: All things Abby, chicken, one dish meals

Since Mother Nature is a B, and we've got a cold front on the way in, I figure its the perfect time to share a crockpot recipe with you! This was one of the easiest ones ever, but then again, I haven't met a super hard crockpot recipe very often. It's sort of the point of the crockpot, isn't it?! Anyway, I had seen this recipe on Pinterest a zillion and one times and had it in my pile to try forever, which meant I had all the elements on hand. Most of them are frozen or canned, so I always kept this on the back burner for a day when I had no dinner ideas (it happens to the best of us)...and that day finally arrived! I had also heard from a few friends who had tried it that this was worth giving a shot, so I saddled up and rode. I do not know who posted this recipe originally, so if anyone does, you can let me know so I can give them credit!
1 (19 oz) bag frozen cheese tortellini
1 small bag of fresh spinach
1 (14.5 oz) cans Italian style diced tomatoes, drained
1 block (8 oz) cream cheese (I always use fat free)
1 lb ground turkey or chicken sausage
4 cups chicken broth
1 can mushrooms (I added this)
Brown the meat and add all ingredients to the crockpot. Mix well and cook on high for 2-3 hours. I always, always, always cut the cooking time down on crockpot recipes. Seems like they always say 4-6 hours or so, and I've never had anything need 6 hours before. Besides, all the ingredients are just needing to be warmed and melded, the meat is already cooked. 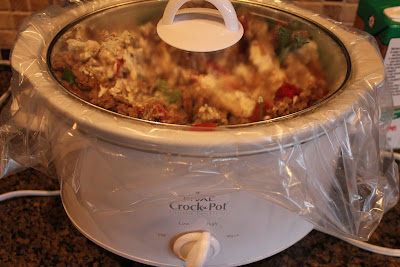 Serve with garlic bread and you're in business! I made this on a Sunday afternoon as I ran some errands, and came home to a gloriously filling dinner that I barely worked on...can't beat that with a tortellini. Happy hump day, all! 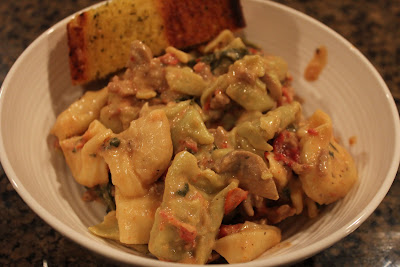