I've never made stroganoff before.  I didn't think I even cared for it until Justin made it for me once when I was sick.  His mom has a bomb recipe that he calls her for each time he wants to make it...so this has been one of his specialties that I haven't tried to make before.

But since it's gotten chillier out lately, my dishwasher is broken until the repairman comes on Thursday, and I'm hitting boot camp in the evenings on the reg, I've been pulling the crockpot out as much as possible so I don't have to clean a bunch of dishes or worry about dinner when I get home ready to eat my arm off with a little post workout appetite.

In the crockpot, combine the meat, soup, onion, Worcestershire sauce, and water. Cook on low for 5-7 hours, and stir in cream cheese and pepper a half hour before serving.  I served on top of a bed of no yolk egg noodles that I boiled right before serving. 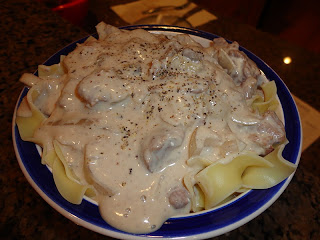 Final verdict: Mama Stensland wins...duh!  We decided we like the ground beef in there instead of the stew meat.  I also didn't have any mushrooms when I made this so Justin was disappointed in that.  The sauce was very rich (although also very tasty) so this seemed like a fairly heavy meal even though I used thin egg noodles.  All in all, this was an alright dinner but nothing to write home about, would maybe make again since it was so easy but our go-to stroganoff will stay Candy's recipe...score one point for Mom!

I will have to get the full recipe and maybe (GASP) write it down this time to share with you all when we make it next...