I tweaked this recipe a bit, but I absolutely LOVED this! Justin and I were discussing that I need to somehow tag the recipes we like so much that we want to make again, because we try so much new stuff, that we never remember ones we loved.  I'll work on a system for that....but in the meantime, this was a diamond in the rough as far as new recipes go. I'm glad he liked it so much because I felt bad that my kale recipes last week were not his faves (even though I loved them).  He's usually a big fan of the tortelini soup but with my last minute tortelini changeup came a wave of disappointment in his dinners last week.  So this week is all about boy food...I'm excited for the stroganoff I have in the crockpot for tonight, because that's one of his faves as well...hopefully it turns out as good as his mom's!

3 lbs bone in, skin on chicken thighs (could use chicken breast as well to cut calories, I had some thighs to get rid of so we went with the recipe)
1 t pepper
1/2 cup water
1/2 cup soy sauce
2 T sesame oil (could go without this, I skipped it to lower the calorie count)
1/2 cup bottled hoisin sauce
2 cups prepackaged cole slaw mix (I used a half a bag of brocolli slaw that I had leftover in the fridge)

Add all the ingredients in the first section except for the slaw, and cook on low for 5 hours.  Remove the chicken and debone before adding back to the crockpot.  Add the slaw, green beans, and crushed red pepper now, and I would probably add a can of mushrooms next time, I just didn't have any when I made this.

Cook for another 1-2 hours on low and serve over a bed of Uncle Ben's teriyaki 90 second rice.  The crockpot full was annihilated by Justin, Curt, Jones, and myself on Saturday night...Sammy only got a small leftover plate.  Bonus points for crockpot dinners that are ready when everyone comes in the house from the shop hungry for some munchies after a few beers! 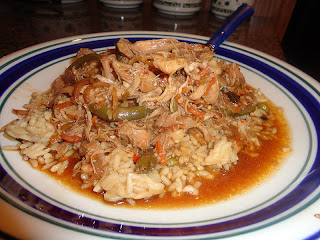 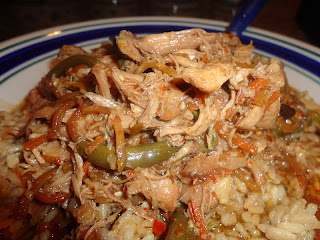